What did I win, you might ask. Well, I’d tell you if I knew. Though I’m not sure exactly what I’ve won I know who gave me the award.

Apparently there is a committee of 13 year old boys somewhere that pass out parental titles. And the reason I know I’ve gotten one is because I always have a house full of them. Even when they are all supposed to be somewhere else, they end up here – in quantity – and I’m not at all sure why.

That’s why I’ve decided that I have been awarded something. I’m not sure which one I’ve gotten but I do have some ideas:

1. The Mother Most Likely to Order Pizza
– You see I have this thing about feeding my kids at regular intervals. And I can’t feed mine without feeding everybody in the house who is under 18. I have this innate communal mother gene. Anybody in the house under 18 is my child while they are here. – So whenever meal time arrives I am getting food elsewhere (it’s one thing to give your own family food poisoning but it’s just embarrassing to take down the entire 8th grade) And you know how 13 year old boys like to eat. Little hoover vacuums – these people – And I don’t know about yours but mine don’t have an ounce of body fat anywhere. (pisses me off).

2. Mother Who Got Suckered into Buying the Most Game Systems.
– I think that one speaks for itself. And by the way you would not believe the funk generated by a room full of 13 year old boys huddling around a video game for a couple of hours with the door closed. Sometimes I throw them out and make them play ball just to air out the room.

3. Mother Least Likely to Go Crazy When Something Gets Broken.
– My 13 year old is very social. He has whole packs of friends. Several of them are very physical. They have a run and shoot offense. Skate boards bicycles, foot balls. You name it. They fly around here like a swarm of bees. I don’t object too much for a couple of reasons: A. I like that they don’t just sit around and play video games. B. He is the last of six sons. Lots off stuff has gotten broken over the years. You either learn to go with the flow or lose your mind. I decided to go with the former.

4. The Mother Most Likely To Engage In an Adolescent Conversation Without Judgment
I talk to them like I was thirteen. If they were engaged in some low level nonsense I ask about it like I am interested. I laugh. I say things like “You didn’t really say that did you? That’s cold. I bet he never bothers you again.”
My son won’t tell me anything but if your are non judgmental with other people’s kids they give up all kinds of information. Of course, if they are doing something really bad (a) they don’t tell me and (b) I’d get all in it. But they tell me what they are thinking and the basics of what they are doing. That’s good intelligence. The CIA would be proud.

– Anyway, it appears that I’ve gotten the award for something. And like I said, you don’t get a statue for it, all you get is a house full of kids.

I have four here now even though the plan was as of 5:00 pm yesterday was that my son was going to sleep over at someone else’s house. Next thing you know its 7:30 pm and I am getting a call saying ‘can you pick me up from the mall and yea can Chris come.’ I say okay. When I get there I find my son, Chris and yet another kid I didn’t know about. What am I gonna do leave that last kid there? So I brought them all home. By the time I woke up this morning my husband says another showed up after I went to bed.

But as my husband says: It’s better to have them here where we can keep and eye on them –

Mess, funk and broken lamps notwithstanding.

I got up early this morning (5:30) so I could meet my girlfriend for tennis. It was a bit windy (that is today’s excuse for not hitting well) but my serve was better than normal. That was cool. My friend is better than I am but she is very patient and supportive. Her name is Toni – so you know I have got to love that!

In addition the the live performances I am starting a new phase of my career. Can’t discuss it yet. There is still an opportunity for me to be laughed out of the room on this one but I like to reach – and don’t mind falling much. (ooooh that’s a lie – I mind a lot – but not enough to keep me from doing it again. . . and again . . .)

I have my regular tennis lesson at 1:00 pm today. I hope the wind dies down before then. Thanks for your responses to yesterday’s blog. It’s hard putting the genie back in the bottle. But what are you going to do just watch it and shake your head?

Whenever my husband leaves town or will be away from home for a while he tells my oldest son “Will, You’re next in line. While I’m gone you are the man of the house.”

When he was young he thought it was cool. When I would ask him to help with his younger brother as the man of the house he was on point. But once he reached adolescence he began to question its meaning. Especially the other day when his father took his younger brother to a baseball game out of town and it was just me and Will.

His father said the same thing he always did. “While I’m gone you’re the man of the house.” My son Will responded as follows:

All my husband did is say “remember what I said.”

Well, while hubby was gone I decided to paint the wall in the living room. I thought it best to do it in his absence since I had had a painter come and paint it three different colors three different times and I still wasn’t satisfied. (yeah, that’s right, I want what I want and I was going to work it till I got it)

Anyway while I was in the garage trying to get a ladder Will comes out and says “what are you doing?”

I say, “I’m getting a ladder to paint the wall.” He then took the ladder from me brought it in the house and set it up. I jump on the ladder and he says, “Mom, it’s not steady.” I say “Oh it will be okay, just hold it.”

As he left the room I hollered after him. “THAT RIGHT THERE IS WHAT YOUR FATHER WAS TALKING ABOUT: MAN OF THE HOUSE” What neither one of us could explain to him he did by imitation. He watched my husband and naturally followed suit.

I had to share this because I complain about my hubby and kids a lot on the show. (and I tell you, they do get on my nerves – there’s a whole lot of “I want, I want I want” going on around here)

But I was so proud of my son and husband both. And I have never been able to really put it into words. It was what I wanted to tell that brother i yelled at the other day but didn’t have it together enough to say.

That’s why you fellas have got to be there. No spreading your seed and walking off. In the house. Involved. Invaluable. 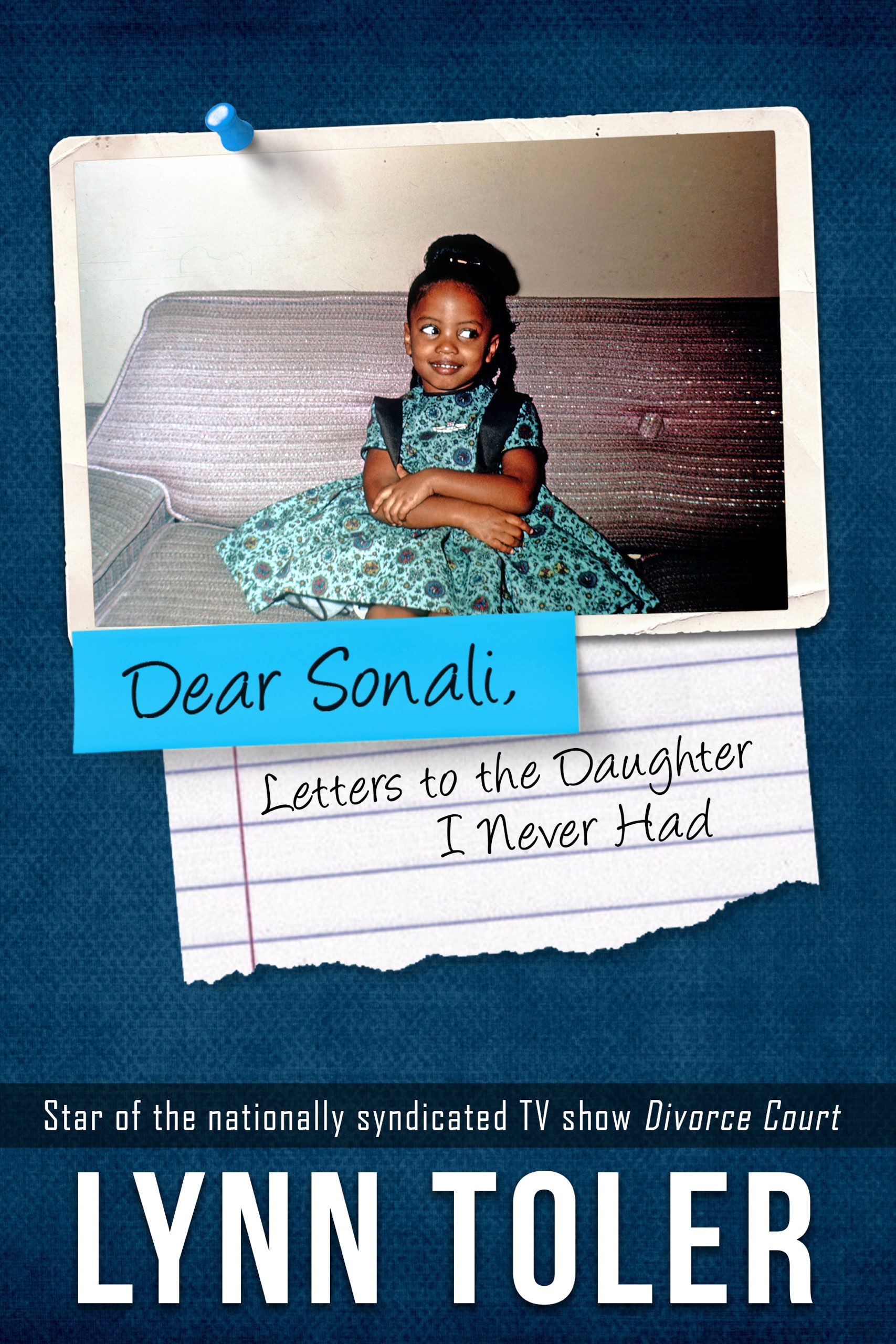 You’ve asked. She’s answered. In Dear Sonali, Judge Lynn speaks to all the young women who call her Mom2 or the Auntie in their Head. 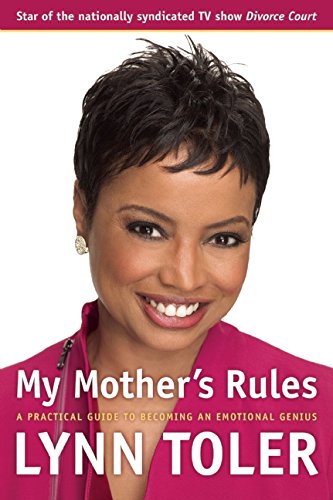 My Mother's Rules" is a humorous, easy to follow self-help guide to managing your emotional life. 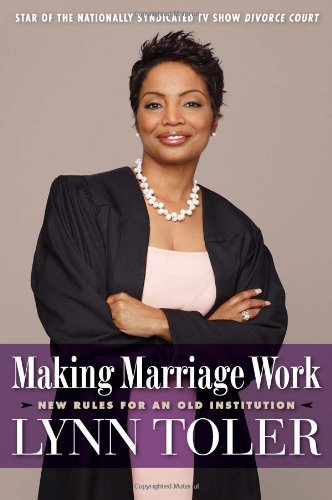 Using lessons learned on the bench along with humorous anecdotes from her own 30 year marriage, Judge Lynn Toler wrote "Making Marriage Work" as a logical and simple guide to bringing back the practicality lost in relationships over the years.

Judge Lynn Toler became the host of the longest running television court program, "Divorce Court" in 2006. Prior to that, Judge Lynn Toler graduated from Harvard University and The University of Pennsylvania Law School. She began practicing law in Cleveland in 1984. In 1993, at the age of 33, she was elected judge of The Cleveland Heights Municipal Court. Judge Toler volunteered actively in her community creating innovative programs for young offenders such as Woman Talk, a program designed to intensively mentor young, at-risk girls.

Toler also headed the Cleveland Heights Coordinated Community Response to Violence against Women, a countywide initiative for the coordination of community resources to assist women who are victims of violence. She was also active as an advisory board member for Templum House, a battered women's shelter. As a result of her work in the area of domestic violence in 2002, she was awarded The Humanitarian of the Year Award from The Cleveland Domestic Violence Center.

Judge Toler's dedication to ending domestic violence continues. Currently, she is on the Board of GoPurple.org, a non-profit organization that addresses the issue of domestic violence through education. GoPurple.Org sends educators into classrooms teaching students about healthy relationships, signs of potentially abusive relationships, and ways to help both themselves and others who are in abusive situations.

Judge Toler is the author of three books including her most recent "Making Marriage Work: New Rules for an Old Institution." Her first, "My Mother's Rules: A Practical Guide to Becoming an Emotional Genius" published in 2006, is a humorous memoir in which Judge Lynn recounts a childhood lived in the shadow of mental illness and provides a practical guide to the emotional lessons learned from that experience. And her time on the bench. Her second book, "Put It In Writing," coauthored with Deborah Hutchison, was published in September, 2009. It gives readers concrete, conflict-free solutions to the difficult situations that arise between family and friends.

Judge Toler has written for a variety of magazines including Divorce Magazine published through out the United States and Canada. In 2009, Judge Toler was given The Voice of Freedom Award by the Philadelphia Chapter of the Dr. Martin Luther King Jr. joining former honorees Colin Powell and Vice President Al Gore, in ringing the Liberty Bell on Martin Luther King Day.

Currently, Judge Toler appears regularly as a guest expert on WeTV's Marriage Bootcamp. Born on October 25, 1959, she has been married to Eric Mumford since April, 1989. She has two sons and four stepsons.

And the Winner is . . . ME. What did I win, you might ask. Well, I’d tell you if I knew. Though I’m not sure exactly what I’ve won I know who gave me the award. Apparently there is a committee of 13 year old boys somewhere that pass out parental titles. And the […]

Posted by Staff on Jan 8, 2009 in Uncategorized | No Comments

Hello all, I got up early this morning (5:30) so I could meet my girlfriend for tennis. It was a bit windy (that is today’s excuse for not hitting well) but my serve was better than normal. That was cool. My friend is better than I am but she is very patient and supportive. Her […]

I just had to share this. Whenever my husband leaves town or will be away from home for a while he tells my oldest son “Will, You’re next in line. While I’m gone you are the man of the house.” When he was young he thought it was cool. When I would ask him to […]