Posted by Judge Lynn on May 1, 2015 in Uncategorized | No Comments

Hello everybody. This is a candid shot of me and Boogie, The Dog. 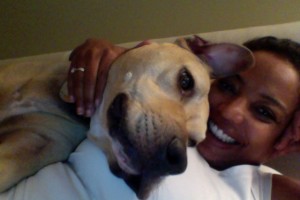 Six* and I went out and got him on a lark one day. Well, it wasn’t really a lark, I had been mulling it over for a while. In fact I had already made a few recognizance missions, on the down low, to Adopt-a-Pet Weekends at PetSmart.

Here’s the thing … we were almost done. BigE and I where on the home stretch to free. The last was getting ready to go. We were going to be empty nesters. I think my husband had visions of impromptu vacations, lengthy travel and, to be honest, just not taking care of anyone who wasn’t us.

I, on the other hand, was looking forward to having the house to ourselves and making far fewer meals.

Dog poop and personality gave me pause as well. I didn’t want to deal with the former and I was afraid I might get a dog that was simply, well, how should I out it, a pain in the ass.

(I think Ruthie and her crazy stories about the mayhem in her home when rescuing certain ones scared me a little bit… just saying. LOL!)

Anyway, Six is a persuasive fellow. His love of life and impulsive decisions got the best of me one day and he said, “Oh you worry too much about what might happen. He seems cool. Let’s just bring him home.” So we did.

I have to say, it was stressful in the beginning. He tore through the house like a Tasmanian Devil for a full 2 hours. He ate one of my favorite shoes and pooped in the living room. I gave my son the side eye too. “See what you’ve done to me?”

To his credit, Six was all over he poop thing. He never minded picking it up and he’d do it really quickly, often trying to get to it before I stumbled across the offending material. I never have shoes on in the house and I tend to be doing other things while walking. As you might imagine these personal tendencies made for a couple of unpleasant moments I’d prefer not to describe.

But as time wore on we figured out that the dog was actually pretty much potty trained. It was the excitement of a new home that had caused him to tear about and poop at will.

Anyway, BigE was not at all amused. “This dog,” he said, “is crazy.” He then made it clear to Six that the dog (now named Boogie) was his responsibility. And if you know Six at all, his name and responsibility rarely make an appearance in the same sentence.

But apparently dogs have some magic in them. Six was all over it and him, feeding and picking up poop without prompting. They slept in the bed together.

Now that he has moved on it’s just me, BigE and the dog. And I think BigE is more happy about his presence than me. I cuddle and love; they play tug of war. BigE picks up poop because he believes that it is something a woman simply should not have to do. (Every once in a while old fashioned comes in very handy.)

Anyway we walk him a lot. Especially me. I’ve lost 3 pounds in the process. When I am stressed, me and my canine psychologist hit the bricks. We amble about, he sniffs and I breathe. We both Smell the Roses in our own way.  He even enjoys trips to the vet, he is an attention hog and doesn’t care what kind it is.

You have gotta love a dog!

ALL THE BEST TO MY FELLOW DOG LOVERS!

*My husband, BigE and I have, between the two of us Six sons. when I speak about them in my blogs I name no names. I just give numbers.