Sooner Than We Think 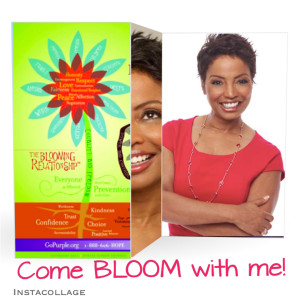 It IS on us, just like Joe Biden said. ItIsOnUs.org.

It is on us to step up and step in when we see the potential for abuse.

I’d like to take it one step further though. I think it is on us to step in sooner. Changing the culture requires a comprehensive approach with an audience that’s young. That’s why I am on the board of GoPurple.Org. a non-profit organization that sponsors a program called Bloom365.

Bloom365 is a 7-day, school-based educational program that addresses the epidemic of abusive relationships by targeting its root causes. Abusive relationships can take many forms from bullying, teen dating abuse, domestic violence, sexual assault to workplace harassment and stalking behaviors.

Abusers and their victims often learn the behaviors that lead to those roles early in life. Bloom365 intervenes at the middle school level. It teaches young people about healthy relationships, empathy and boundaries. Meanwhile, we serve as a conduit to safety for those in the school that are already being abused. We hand out cards in the beginning if they want to write a confidential note. These are the things we see:

“I did not realize that if he choked me that I have a good chance of getting killed.”

“I am afraid to go to the mall with my friends because he gets so jealous. What do I do?”

“She keeps stalking me and has threatened to hurt herself if we break up. I did not know I should tell someone about this.”

We also get a glimpse of those who might be struggling with insecurity, depression and the effects of experiencing or being exposed to abuse and get an early opportunity to intervene. They send us things like this:

“You know that empathy thing you keep talking about? Well, I don’t have any. Nobody cares about me and I don’t care about anybody else.”

“Now it all makes sense. I understand why my mom doesn’t leave, she’s stuck in a cycle.”

“I just realized that my first boyfriend coerced me to have sex with him and that is considered rape. I wasn’t ready and did not want to do it, by the said he would find someone else. So, I did it.”

We don’t just educate and go though. Upon conclusion, Bloom365 leaves behind avenues for on-going involvement and continuing student participation in an effort to help create a new generation of adults fluent in the behavioral language of healthy relationships thereby decreasing relational abuse.

I know it sounds like a herculean task, changing the way we see relationships in general. But Bloom365 has been evaluated by the Arizona State University Morrison Institute fir Public Policy and is shown to be effective at changing attitudes, increasing knowledge and motivating teens to break the cycle before it starts. What if we implemented something like this countrywide?

We can effect mass cultural change; we’ve done it before. Remember when we jumped all over seat belts and smoking, targeting a generation of young people across the board to change habitual behavior? When I was young there was no seat belt use and smoking was welcomed everywhere restaurants, planes, you name it. Things change when we get serious and start early.

Abuse starts sooner than you think. It begins in the hearts and minds of both the abusers and the abused when they are young and forming ideas about what’s right and wrong. Because peers exert more influence on each other during their adolescent years than at any other time, we should start addressing the situation sooner than we do. In addition to stepping in when it’s about to happen or responding when it’s over what would happen if we made a concerted effort to keep it from happening at all.

That’s why I support Bloom365. Go to http://www.gopurple.org and see what we do.

Come Bloom with us!